The coal hauling East Broad Top Railroad made its last run on April 6, 1956.

The market for its product had run its economic course and the parent coal company of the same name decided to cut its losses and abandon in place the entire operation. A month after the railroad shut down, the railroad, including all its track, facilities, equipment and land was sold to the Kovalchick Salvage Corporation.

While that should have been the end of the story, the Kovalchicks did not scrape the railroad for some reason. They had purchased a complete self-sufficient narrow gauge railroad that was completely intact up to its final day of operation. They seemed to realize that they had on their hands a treasury of American industrial history and made an effort to keep it intact. Part of the line reopened as a tourist operation which had an all too brief flourish before closing about 5 years ago. While the tourist operation is no more, the line and facilities sit dormant awaiting a rebirth in the form of stewardship from a financially stable organization.

Until a savior arrives, time is held in check by the non-profit Friends of the East Broad Top Railroad, who are committed to preserving and restoring as much as possible. It’s a constant battle as much of the railroad is well over a hundred years old and none has been maintained to the working standards of the revenue-producing railroad of 60 years ago. As the only example of an intact narrow gauge railroad system east of the Mississippi River, the East Broad Top has many passionate supporters who have volunteered their time and money to keep the ravishes of time away. 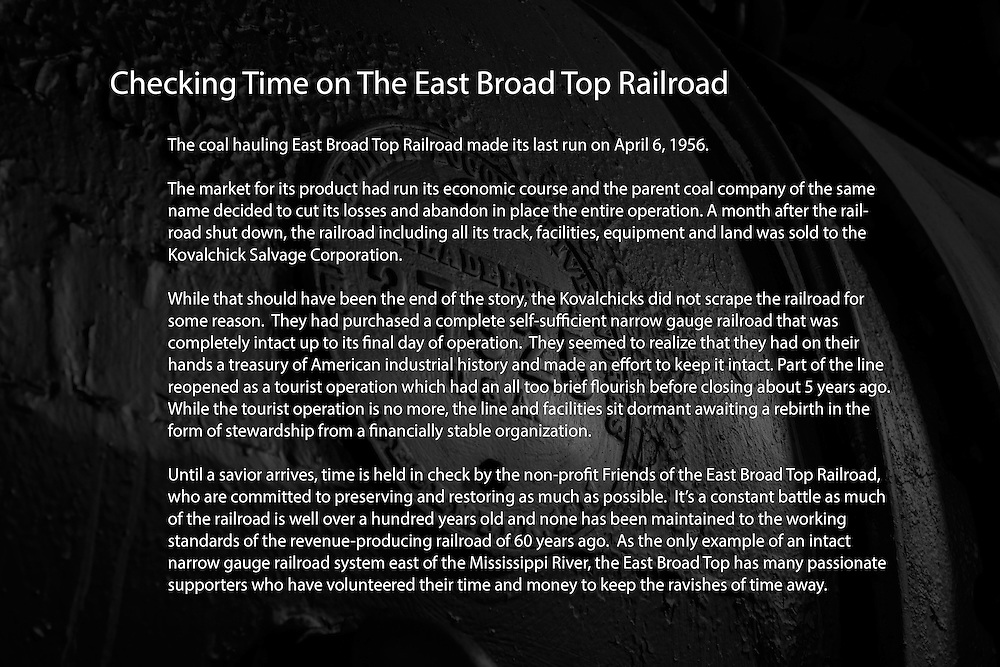